Hail for Robin Redbreast!
Here is a sweet BIRB article that is worth reading: Audubon | 10 Fun Facts About the American Robin 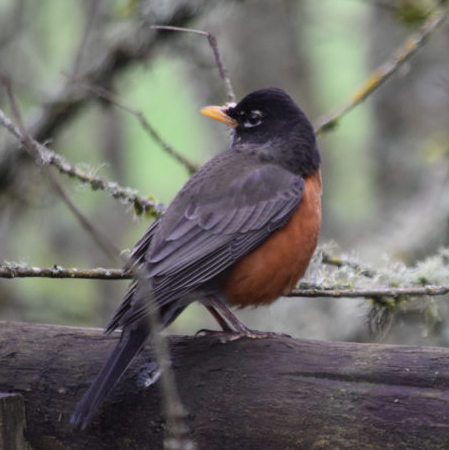 Join Date: May 2015
Location: Ontario Canada
Posts: 5,652
Thanks: 1,420
Thanked 668 Times in 581 Posts
Rep Power: 18
6.) Like most other migratory birds, robins dont maintain pair bonds and often take on new mates each spring. Damn male robins .... they tell their woman they are going out for a pack of worms and they don't come back and leave her to find a new cock of the walk while they go flout around and look for a new younger chick to have some baby's with. Then they dump the newer chick and go do the same thing the next year ? And so on and so on?

ROBIN COCKS ARE THE EQUIVALENT OF DEAD BEAT DAD DICKHEADS ..... That's all I gotta say about that!


Its a good thing the Birb World doesn't have Divorce Attorney Birbs and Family Courts to make these guys pay birb Alimony and Child Support and make them pay for all the broken hearts they cause to the robin hens out there.


That's all I gotta say about that!

At the breeding grounds, male robins put on strutting courtship displays for females. At dawn, ???????? they belt their melodious tunes, shake their wings, fluff their tail feathers, and puff their white-striped throats to entice lady robins.


AT DAWN? NOT BLOODY LIKELY!

The Robin Red Boobhead Breasts in my neck of Ontario seem to think that a car drivng by with an LED headlight is MORNING. So they start BELTING out their annoyingly lovely song to entice some poor robin hen into thinking he is the love of her life and wants to stay with her forever and ever and ever.


I don't think these robin cocks have a working internal clock that starts at 5am or any reasonable respectable time. NO ...... they just warble on and on and on ....


I have a family of crows who live in a huge nest in a large tall tree in the yard next to me and even those mouth pieces don't start announcing its morning to the world until 6am ..... CROWS have some sense of time .... okay I'm ranting here.

That's all I gotta say about that!

Love the article Sweet Pea ..... thanks for sharing.

Join Date: Sep 2018
Location: Thousand Islands, Ontario, Canada
Posts: 461
Thanks: 44
Thanked 13 Times in 13 Posts
Rep Power: 5
I sorta knew I was playing with dynamite by posting this Audubon article, since Robins kinda tick you off -- but it's always fun to read your reactions.

Hope you're having a ♫ CHEERIO ♫ kind of day! *hugs* ~Sweet P.
Mr Peepers likes this.